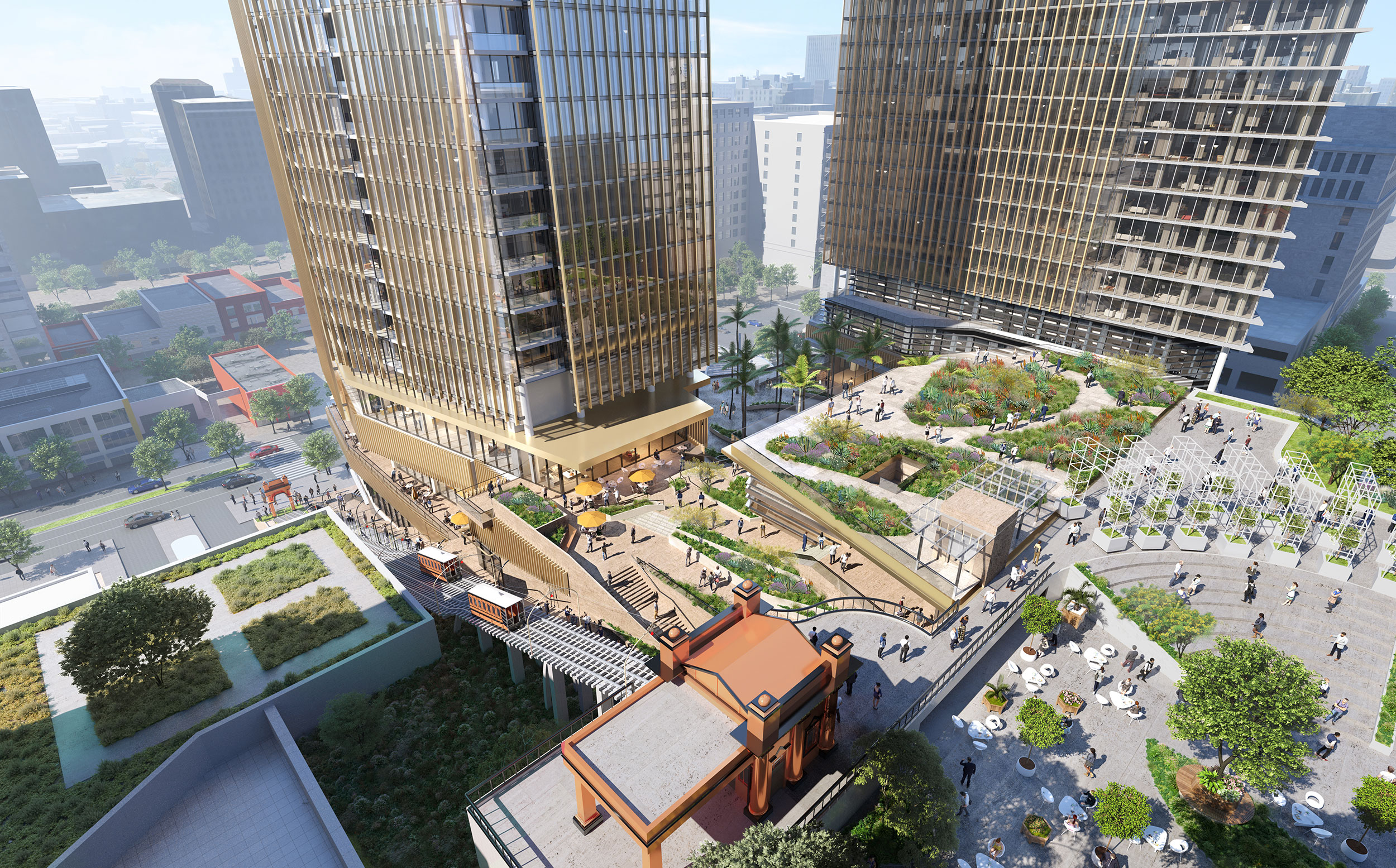 Angels Knoll, the sloped property at Fourth and Hill in Downtown Los Angeles, is well known as a picturesque filming location or the spot in Downtown to watch the goats that appeared seasonally to clear brush eat their way around the base of the Angels Flight funicular. But since 2017, it has also been the future site of Angels Landing, a $2B mixed-use project from a team led by MacFarlane Partners, the Peebles Corp. and Claridge Properties that would bring condos, apartments, hotels and public space to the property.

The project received its entitlements earlier this spring, but there are a few hurdles it has to jump before groundbreaking can take place. One of the most pressing is a deadline requiring the community redevelopment agency’s successor entity to sell off the site, a former CRA property, by the end of this year. The team also has yet to lock in financing. Still, MacFarlane Partners Chairman and CEO Victor MacFarlane told Bisnow he doesn’t doubt the project will come to fruition.

The Angels Landing site is about a block away from another MacFarlane Partners project, Park Fifth and Trademark. When MacFarlane bought that site in 2013, plans for development there had been stalled for years. The company built a 24-story tower and mid-rise building on the property across from Pershing Square that opened in 2019.

But Angels Landing is a new level of challenging. The hilly nature of the sloped site makes building on it difficult and expensive, requiring an immense amount of dirt to be removed before construction can begin.

“There’s a reason why it hasn’t been built on for all this time,” he said.

Angels Landing is slated to include two towers reaching 64 and 42 stories high. It would bring 180 condos, 252 apartments, 72K SF of commercial space and about 500 hotel rooms across two different hotels.

The project has received all the necessary entitlement from the city but is waiting on a couple of other key elements, including a tax incentive given to hotels in Downtown and the finalization of the development agreement.

The hotel tax incentive program allows for hotels to keep a certain amount of their transient occupancy taxes for a set period of time, sometimes as much as 25 years. Many hotel owners and industry professionals have said the incentive is vital to making the math work for tall hotels in the neighborhood, but the program was criticized by the City Controller for not being transparent enough about whether the incentives are paying off for the city, which would otherwise be the recipient of those taxes.

Courtesy of MacFarlane PartnersA rendering by Handel Architects of the Angels Landing project.

Because the Angels Landing parcel is owned by the now-defunct community redevelopment agency, it and other properties owned by the agencies that were dissolved in 2012 are required to be sold off by the end of this year. That transaction still has to occur for this site, MacFarlane said. If the sale of the site to the team developing this project is not complete by the end of this year, MacFarlane said the property is required to be offered to affordable housing developers in 2023.

The purchase of the property is one of the items that is included in the to-be-finalized development agreement, along with other project elements like the community benefit agreement. Both the development team and the city need to sign off on it.

“We think that this thing is ready to go and it should be agreed upon, so we’re pushing hard, but it takes two to tango,” MacFarlane said.

There is a state bill that is proposing a two-year extension, to the end of 2024, to make up for time lost due to the coronavirus pandemic. The bill is moving through the legislative process, but MacFarlane says ideally this project would not need to make use of it and the transaction would occur before the end of the year.

Angels Landing is only required to include 13 affordable units of the 252 rental units it will create, but MacFarlane said the development team has agreed to create an additional 65 units off-site, at a to-be-determined location in Downtown LA. MacFarlane said with construction on the complicated site expected to be very costly, it made more sense to add affordable units off-site rather than in the project itself.

Downtown has changed in the years since the project was proposed.

“Since 2017, there’s no doubt there’s been a downward trend in Downtown Los Angeles, which mirrors a lot of other West Coast urban communities,” he said.

The neighborhood was seeing a flurry of new investment in residential and retail development as well as hospitality prior to the coronavirus pandemic. Office workers’ slow return had a cascading effect on retailers, restaurant and bar owners, and hotels. MacFarlane noted that the rise in street homelessness has also had an outsized impact on Los Angeles and other major cities and that he sees the alleviation of that issue as key to helping LA and other cities fully bounce back.

Because entitlements are in place, MacFarlane and his team cannot adjust their proposal despite the shifts in the market.

Once all agreements and incentives with the city are buttoned up, MacFarlane estimates it would take about a year to get shovels in the dirt. The goal is to be open before the city hosts the 2028 Olympics.

The development of Angels Landing is anticipated to cost roughly $2B. Financing for the project has not yet been secured, but the team has had “preliminary discussions” with potential funders, MacFarlane said.

“I’ve been in this business a long time, and Don [Peebles] has relationships as well. We understand the institutional requirements,” he said. Still, “there’s no doubt that it’s a big number.”